TORONTO, ON. A new extension of the PATH walkway, which currently runs much of the length of the downtown core is being constructed, finally connecting the waterfront area to the rest of the city. Waterpark place will soon have a direct sheltered connection to the subway and the inner city food courts and retail centers. It will bring an end to the era of surviving the snow/rain to make the Metrolinx train on time! Something to certainly look forward to in the upcoming year. 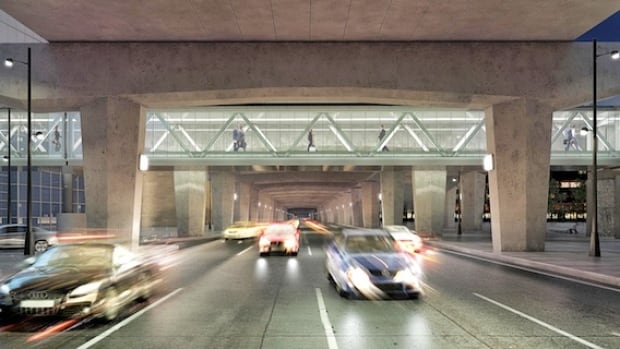 ” A new pedestrian bridge being installed over Lake Shore Boulevard on the weekend will transform our view of Toronto — from above and below.

Drivers on Lake Shore will be the first to see the bridge — a long clear prism of glass below the Gardiner, hanging above the cars.

The installation itself will be a mostly unexpected treat for people who happen to be out late enough to catch a glimpse of a 26-wheeled transporter delivering the bridge to its final destination sometime between midnight and 3 a.m.

The bridge was assembled off-site so that it could be installed over the course of a summer weekend without disrupting weekday traffic. It will likely be in place by noon on Saturday. The final section of the bridge will be installed during another yet-to-be determined weekend in September.

Architect John White of WZMH Architects designed the bridge. “Visually,” he said, “it’s meant to almost disappear. It’s meant to sparkle — to be a clear bridge to see out of and to see through.”

Not just an aesthetic decision, the design was born out of a year and a half of negotiating between the City of Toronto and Oxford Properties, one of North America’s largest developers and managers of office space. 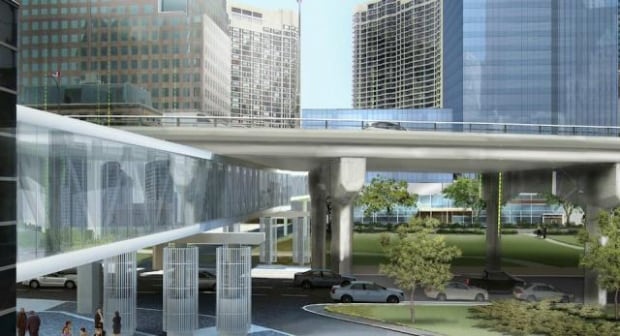 The bridge is a key component of RBC WaterPark Place, one of the largest new office developments in Toronto in recent years. WaterPark Place III, a 30-storey building at Bay Street on the north side of Queen’s Quay West — part of a three-tower development well south of the city’s traditional financial core — will become the new headquarters for RBC.

RBC’s condition for occupying the offices in Toronto’s former waterfront wasteland was that it include a PATH connection so its employees could have easy access from Union Station. The bridge, opening this fall to the public, will connect to WaterPark Place III, 1 York and the Air Canada Centre to, on the north, Union Station and the rest of the downtown.

For city officials, the bridge raised concerns about visual obstructions over a major roadway but they liked the idea of a new PATH connection, especially one that wasn’t paid for by the public purse. Municipal officials would have preferred an underground route but water levels near the waterfront would have made building underground prohibitively expensive.

While the simplicity of the design came out of negotiations with the city, it began to appeal to White for other reasons as well. “It suggests a piece of animation,” said White, in which drivers below watch pedestrians above moving through the bridge while pedestrians watch the drivers below — a place, “to watch the theatre of everyday life.”

Another condition for the city’s first pedestrian bridge on the Gardiner Expressway was that it be moveable to allow work crews to repair the aging freeway’s underbelly. In another engineering first for Toronto, the bridge can be moved entirely out of the way from east to west to allow full access.

White hopes the bridge will inspire other creative ways of reconnecting the city to the waterfront.

When the bridge opens, Toronto’s rush hour crowds will head south from Union Station to the Air Canada Centre where a series of stairs or a barrier-free elevator takes them to the pedestrian bridge, connecting on the other side to 1 York and, from there, to WaterPark Place III.

City planners had one other condition for the pedestrian bridge — that it anticipate the possibility that the Gardiner may come down.

White says that meant building the bridge wide enough to span Lake Shore Boulevard which may be widened in the future. 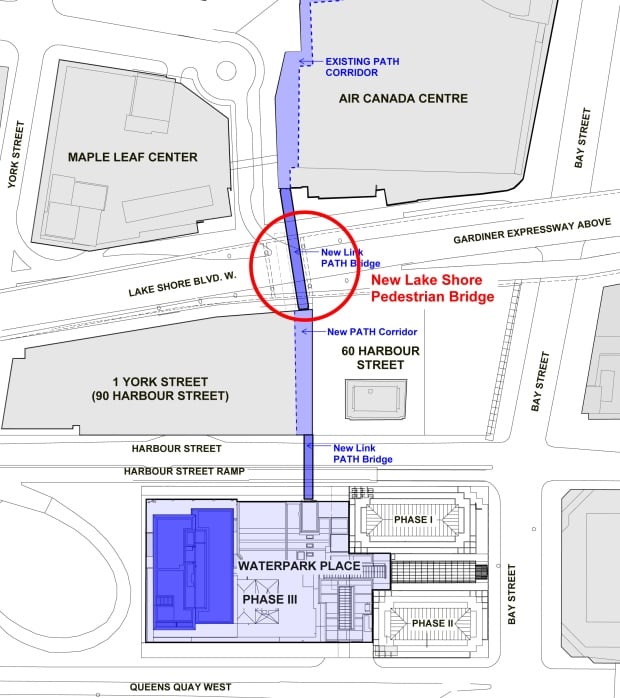 To White, the pedestrian bridge is a sign that the city’s downtown core no longer ends at King and Bay streets.

“It’s stretching in all directions,” said White. Twenty years from now, he predicts, a “dense and urban” area south of the railway lands like the development already taking shape at Bay Street and Queen’s Quay, including WaterPark Place.

A new mix of offices and condos is well underway with 1 York Tower, the Air Canada Square, WaterPark Place III and several condo developments facing each other on Queen’s Quay.  “It’s already a prime urban street”, said White, awaiting its connection to the rest of the city with the new pedestrian bridge. ”

Men’s Fashion Week is coming to Toronto. Have you met TOM*? Quick Facts about Green Retrofitting
Scroll to top